How we came to be.

It took a long time to decide if and where Bergen would get its 50m pool. As early as 1997-2001 plans were drawn up for a centre called "Bergensia Badeland på Nygårdstangen", but these were abandoned by the city council in 2004. They then considered building it at Kronstad as part of the development of the new technical college building and a design competition was announced in Spring 2005. These plans, too, were later dropped. 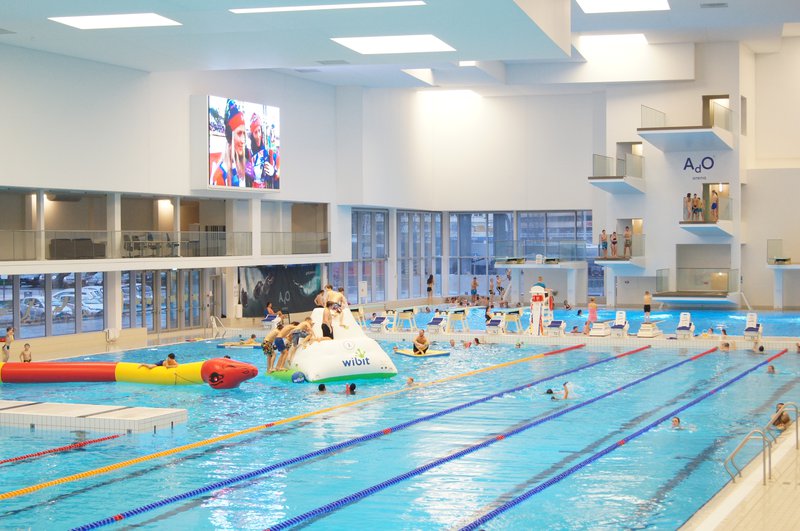 Bergen Council then partnered with the Hordaland Regional Council to build a 50 metre swimming facility in the original Nygårdstangen location. A design competition was announced for a combined swimming centre and high school building in Autumn 2007.

The plan was to open the building in 2010 but because of extremely difficult ground conditions, construction work was delayed several times.

There were many special days on the road to the arena's opening. There was great joy in May 2014 when it was announced that the centre would be named Alexander Dale Oen Arena in honour of the World Champion, or AdO arena for short. Alexander was taken from us far too young, but the arena guarantees he gets the lasting legacy he deserves. The original plan was for the main 50 metre pool to be 2 metres deep, but Oen made it clear that only a 3 metre depth would attract the world's best swimmers to compete in Bergen. He got his extra metre.

His older brother Robin Dale Oen was given the honour of being the first person to test out the new pool on the 23rd June 2014 and with that swimming at AdO arena was underway. The next to jump in were the national swim team, children from The Dale Oen Experience and councillor Helge Stormoen. The diving tower was christened with a 10 metre synchronised dive by Espen Valheim and Amund Nordal Gismervik.

The opening of Amalie Skram College followed at the end of the summer holidays and AdO arena opened for testing by local swimming clubs, divers and schools on the 1st September. The arena finally opening to the general public on the 24th October and the water-loving citizens of Bergen were at last able to dive into the pool they had waited so long for!

This timelapse video shows the building's construction from 2012-2014.